I had no idea Boxcar Children are classic children stories.  Did you know there are over 150 books?  Did you read them when you were a kid?

In this DVD, the children had a choice to stay on the island by themselves with Joe and Captain Daniel for the summer.  You watch the children on their daily island adventures like fishing and exploring caves.  It is kinda interesting to see the kids very tame and very responsible.  If my kids were left on the island, they would run around like crazy and bicker at each other.  The movie is very calming and lighthearted movie.  Slowly, Joe has integrated into the childrens' lives.  But who is Joe?  Why is someone looking for him?  You will find out who he is in the movie.  I enjoyed the movie and I think your kids might like it too. 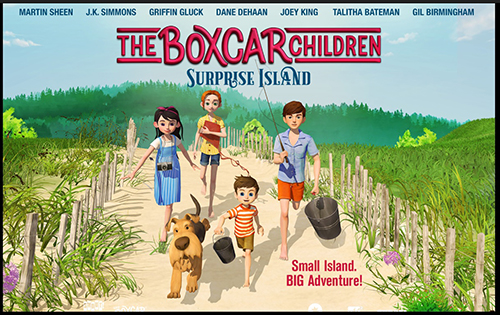 Los Angeles, CA – Small island. Big adventure! The beloved Boxcar Children are headed to Blu-ray and DVD on August 7th with the release of the new animated feature film THE BOXCAR CHILDREN - SURPRISE ISLAND, courtesy Legacy Classics and Shout Kids. Fans can now pre-order their copies on Amazon.com or shoutfactory.com.

THE BOXCAR CHILDREN - SURPRISE ISLAND follows the adventures of the orphaned Boxcar Children as they spend an entire summer living on their Grandfather’s small, nearly uninhabited island. There they meet Joe, who is friendly and helpful, and inexplicably living on their island. Does their new friend have a secret?

THE BOXCAR CHILDREN - SURPRISE ISLAND is fun for the whole family, and is Dove approved for all ages. It is directed by Dan Chuba and Mark Dippé, and is produced by Legacy Classics and co-produced by Shout! Factory, Albert Whitman & Company and Blueberry Pictures. THE BOXCAR CHILDREN - SURPRISE ISLAND is the first of three new animated features to be adapted from the “The Boxcar Children” book series, as part of a partnership between Shout! Kids and Legacy Classics.

“The Boxcar Children” by Gertrude Chandler Warner is one of the best-selling children’s book series of all time. Having just marked its 75th anniversary, over 70 million books have sold world-wide. There are 150 books in the series, and over 1 million kids read the books in schools across North America every year.

About Legacy Classics
Headquartered in Los Angeles, Legacy Classics has animation and visual effects studios in Seoul, Jakarta and Bali. Founded by Dan Chuba and Mark Dippé, the company is dedicated to creating family entertainment and educational tools based on classic and award-winning children’s literature. Legacy Classics has teamed with publisher Albert Whitman & Company to develop films, series and educational apps based on their library of intellectual property including the best-selling “Boxcar Children” book series.

Prior to founding Legacy Classics, Dan Chuba was the Executive Producer and a partner at Hammerhead Productions and the Executive Producer of PDI. He has produced 9 independently financed animated feature films and visual effects on over 100 major motion pictures. Mark Dippé has directed and/or produced several independent features, and has directed movies for New Line Cinema, Columbia TriStar, and Disney Channel, as well as numerous commercials. He previously served as a VFX supervisor at Industrial Light & Magic and supervised work on some of the most groundbreaking films in history, creating the dinosaurs in JURASSIC PARK, water pseudo-pod in THE ABYSS and the liquid metal man in TERMINATOR 2.

Shout! Factory would like to offer one of my readers to win a copy of The Boxcar Children - Surprised Island DVD.


This giveaway will run from October 1st to October 22nd, 2018 (midnight EST). Winner, You have 72 hours to reply. You must be 18+ Open to Canadians and U.S. only Good Luck!
Psst - Can't win if you don't answer the mandatory question.  I am not responsible for shipping and handling or damages of the prize.  The prize is shipped by the Sponsor and they may substitute the prize depending what is in stock.  Your information will be sent to the Sponsor for the purpose of shipping out the prize.

*Disclosure - The product in this review was provided to me free of cost for the purpose of conducting this review. All opinions expressed in this review are my own and are not influenced by monetary compensation.
Posted by HappyChinaDoll at 23:47