A new animated feature The Boxcar Children – Surprise Island, opening in theaters nationwide on May 8 as part of a special after-school event with Fathom. The film is based on one of the books from the beloved series by Gertrude Chandler Warner and is family-friendly for all ages, with a recommendation for kids 3-13. With hundreds of theaters across the nation booked, there will likely be a theater near you offering up the film. 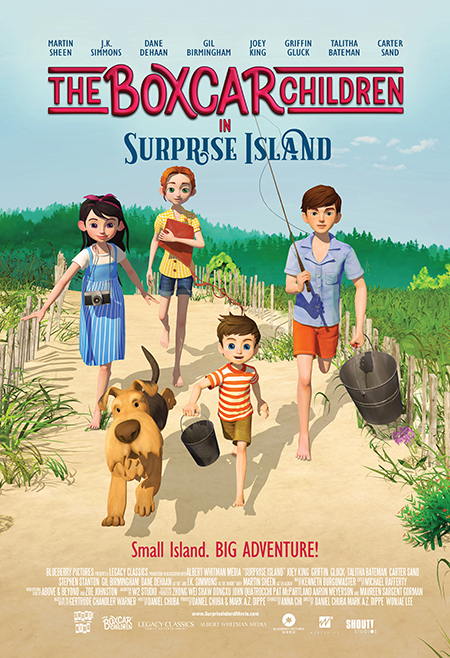 You can purchase advance tickets using this link http://ow.ly/D8Hw30jt1wq
This theatrical event is US-only.

TO MOVIE THEATERS NATIONWIDE ON MAY 8, 2018 ONLY

The beloved Boxcar Children are headed to the silver screen! The new animated feature film THE BOXCAR CHILDREN - SURPRISE ISLAND hits theaters nationwide for a special one-day event on May 8.

This exciting after-school event is a partnership between Fathom Events, Shout! Kids, and Legacy Classics, and it will also offer moviegoers an exclusive introduction with actor Griffin Gluck and Director Dan Chuba explaining the process of adapting the book to film, and the process of animating. Moviegoers will be able to enjoy the film in approximately 700 select U.S. movie theaters. A complete list of theater locations will be available at Fathomevents.com. Tickets for THE BOXCAR CHILDREN - SURPRISE ISLAND will go on sale Friday, April 6, and can be purchased online or at participating theater box offices.

THE BOXCAR CHILDREN - SURPRISE ISLAND follows the adventures of the orphaned Boxcar Children as they spend an entire summer living on their Grandfather’s small, nearly uninhabited island. There they meet Joe, who is friendly and helpful, and inexplicably living on their island. Does their new friend have a secret?

THE BOXCAR CHILDREN - SURPRISE ISLAND is fun for the whole family, and is Dove approved for all ages. It is directed by Dan Chuba and Mark Dippé, and is produced by Legacy Classics and co-produced by Shout! Factory, Albert Whitman & Company and Blueberry Pictures. THE BOXCAR CHILDREN - SURPRISE ISLAND is the first of three new animated features to be adapted from the “The Boxcar Children” book series, as part of a partnership between Shout! Kids and Legacy Classics.

“The Boxcar Children” by Gertrude Chandler Warner is one of the best-selling children’s book series of all time. Having just marked its 75th anniversary, over 70 million books have sold world-wide. There are 150 books in the series, and over 1 million kids read the books in schools across North America every year. 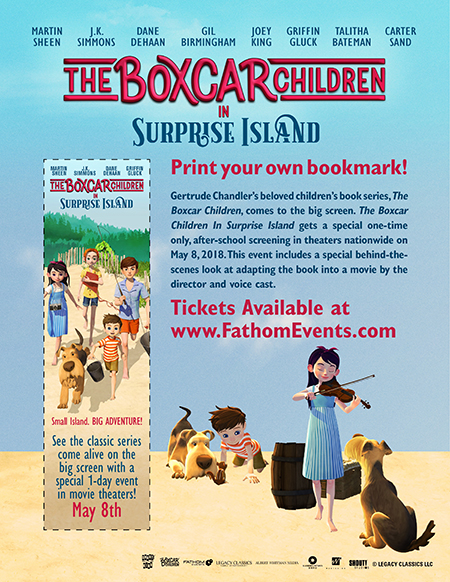 About Fathom Events
Fathom Events is the leading event cinema distributor with participating theaters in all 100 of the top Designated Market Areas®, and ranks as one of the largest overall distributors of content to movie theaters. Owned by AMC Entertainment Inc. (NYSE: AMC), Cinemark Holdings, Inc. (NYSE: CNK) and Regal Entertainment Group (NYSE: RGC) (known collectively as AC JV, LLC), Fathom Events offers a variety of one-of-a-kind entertainment events in theaters such as live performances of the Metropolitan Opera, top stage productions including Newsies! The Broadway Musical and George Takei’s Allegiance, major sporting events such as Mayweather vs. McGregor, epic concerts with artists like Lady Antebellum and Sammy Hagar, the yearlong TCM Big Screen Classics series, inspirational events such as Is Genesis History? and IN OUR HANDS: The Battle for Jerusalem, and beloved anime titles like Princess Mononoke and Spirited Away. Fathom Events takes audiences behind the scenes for unique extras including audience Q&As, backstage footage and interviews with cast and crew, creating the ultimate VIP experience. Fathom Events’ live digital broadcast network (“DBN”) is the largest cinema broadcast network in North America, bringing live and pre-recorded events to 912 locations and 1,427 screens in 181 DMAs. For more information, visit www.fathomevents.com.

About Legacy Classics
Headquartered in Los Angeles, Legacy Classics has animation and visual effects studios in Seoul, Jakarta and Bali. Founded by Dan Chuba and Mark Dippé, the company is dedicated to creating family entertainment and educational tools based on classic and award-winning children’s literature. Legacy Classics has teamed with publisher Albert Whitman & Company to develop films, series and educational apps based on their library of intellectual property including the best-selling “Boxcar Children” book series.

Prior to founding Legacy Classics, Dan Chuba was the Executive Producer and a partner at Hammerhead Productions and the Executive Producer of PDI. He has produced 9 independently financed animated feature films and visual effects on over 100 major motion pictures. Mark Dippé has directed and/or produced several independent features, and has directed movies for New Line Cinema, Columbia TriStar, and Disney Channel, as well as numerous commercials. He previously served as a VFX supervisor at Industrial Light & Magic and supervised work on some of the most groundbreaking films in history, creating the dinosaurs in JURASSIC PARK, water pseudo-pod in THE ABYSS and the liquid metal man in TERMINATOR 2.

Shout! Factory would like to offer one of my readers a copy of the three book set from the Boxcar Children world. They are Guide to Adventure, Gertrude Chandler Warner and The Boxcar Children and the novel Surprise Island, on which the film is based. 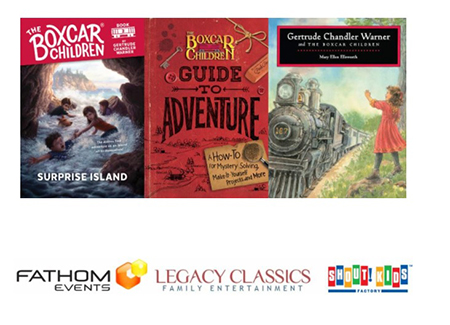 This giveaway will run from April 21st to April 28th, 2018. Winner, You have 72 hours to reply. You must be 18+ Open to Canada and U.S. only Good Luck!
Psst - Can't win if you don't answer the mandatory question.  I am not responsible for shipping and handling or damages of the prize.  The prize is shipped by the Sponsor and they may substitute the prize depending what is in stock.  Your information will be sent to the Sponsor for the purpose of shipping out the prize.

Disclaimer - I will be receiving a three book set from the Boxcar Children world.
Posted by HappyChinaDoll at 20:25