When the weather is colder, my daughters and I are most likely to stay inside more often.  We love our girls night in and take turns picking something to watch together.  During the holiday season we like to watch some thing with a holiday theme.  NCircle Entertainment has some great DVDs that I would recommend for the whole family to share. 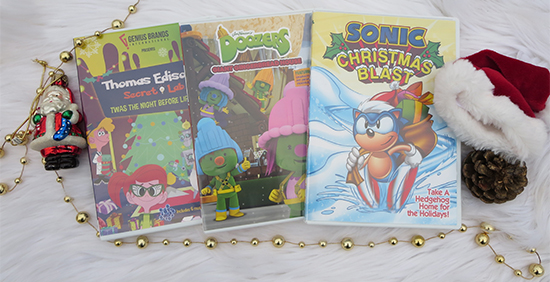 Who remember watching Fraggle Rock back in the 80s.  It was one of my favourite shows when I was growing up.  Doozers were little green builders living inside the Fraggle cave.  The Doozers in this DVD are in CG and not the puppets that we remember them as.  You will meet the Pod Squad who are Spike, Molly Bolt, Daisy Wheel, and Flex.   In every episode they come across a problem and they put their heads together to solve the problem.  In one episode, their mission was to build a life size gingerbread house but it kept on falling apart.  Then one of them had a great idea then it all worked out.  You might also like the episode where the gang put their heads together and build something to help Molly Bolt skate on the ice because she could not skate.   It is a great DVD to show kids that when you help each other and bounce ideas off each other, you will be able to solve any problems.

Doozers: Giant Gingerbread House
The Pod Squad want to build a Doozer-sized Gingerbread House! However, in order to achieve such a large size Gingerbread House it's going to take some clever construction to create. Can the Pod Squad do it? Then, Daisy Wheel wants to ice skate with the others, but she doesn't know how. Together, the Pod Squad build her a custom Doo-Step Skating Dress that let's her glide across the ice in no time. Weee! Enjoy these adventures and six more focusing on science, technology, engineering and math!

It is Sonic Christmas!  Who does not like Sonic?  Another great classic character based on a 80s video game.  It was sad to find that Santa Claus decided to retire and unfortunately he put Robotropolis which made it worst.  It turns out that Santa Claus was kidnapped and he was not retiring.  Then Robotropolis stole all the toys and Christmas was doomed.  Watch how Sonic help save Santa Claus and save Christmas.  This DVD also comes with two additional Sonic episode that you will also enjoy.

Sonic Christmas Blast
Santa Claus announces his retirement on television and the public is shocked! But it's Santa's replacement Robotropolis who has everyone worried. It seems Robotropolis has his own ideas and instead of giving boys and girls gifts Robotropolis would rather receive them. Join Sonic the Hedgehog in an adventure to rescue the spirit of Christmas and bring joy back to the world!

This DVD is great for a older child.  You will be amazing how much a child can learn so much science in this one DVD.  They can learn that Thomas Edison invented the light bulb and learn what a wormholes is.  They will also learn abit about Aeronautics and so on.  Throughout the DVD, there will be few cute music videos to recap what the kids, JD, Angie, Nicky, Kent, discovered.  This DVD is fun to watch and extremely educational.  It is for older kids because I doubt younger kids would understand many of the scientific explanations.


Thomas Edison's Secret Lab: Twas the Night Before Liftoff
Unknown to the world, Thomas Edison built a secret lab where he invented a virtual version of himself and a steampunk robot named Von Bolt. Years later, Angie, a twelve-year-old science prodigy, discovers the lab. When an old friend of Edison's visits the lab and asks the Secret Lab Kids to help him with an urgent, top-secret project, they have to follow him through a wormhole to get to his own secret lab. Who could this mysterious friend be and what is this top secret project during the holiday season?

NCircle Entertainment, the leading independent distributor of kids’ DVDs, is offering a copy of:
This giveaway will run from November 14th to December 8th, 2017 (midnight EST). Winner, You have 24 hours to reply. You must be 18+ Open to Canadians and U.S. only Good Luck!  Psst - Can't win if you don't answer the mandatory question.  I am not responsible for shipping and handling or damages of the prize.  The prize is shipped by the Sponsor and they may substitute the prize depending what is in stock.

*Disclosure - The product in this review was provided to me free of cost for the purpose of conducting this review. All opinions expressed in this review are my own and are not influenced by monetary compensation.
Posted by HappyChinaDoll at 19:03